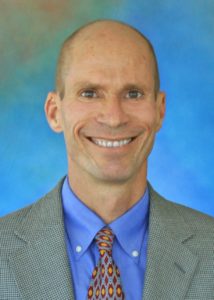 This large pragmatic trial will test treatments intended to reach large groups of adult patients who have serious thoughts of suicide. Patients at risk will be identified and followed through medical records. The research team will test two treatment programs: The first program, a care management approach, draws on two previous efforts, a collaborative care for depression strategy plus an approach developed at the Henry Ford Health System. The second program is an online skills training method designed to help people manage painful emotions and stressful situations.

To determine the impact of the two prevention strategies, patients will be compared with another group of patients receiving usual care. This 5-year study is designed to enroll 19,500 patients. In addition to its large scope and the significant problem that it will address, this study is groundbreaking because the study design and intervention programs were developed in collaboration with people with “lived experience,” those who have experienced suicidal thoughts or survived suicide attempts themselves. 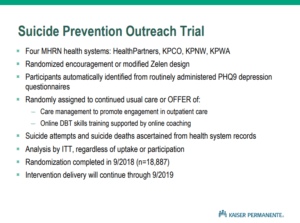 Principles and procedures for data and safety monitoring in pragmatic clinical trials. Trials. 2019;20(1):690.