The Exploration, Adaption/Preparation, Implementation and Sustainability (EPIS) framework articulates variables that might influence the ability to effectively implement evidence-based practices and considers both external (outer) and internal (inner or local) context of the organizations (Aarons et al. 2011).

Efficacy of an intervention is only a small piece of a much larger puzzle, and the “gold standard” for determining efficacy has been the explanatory clinical trial. But with PCTs, the “rigor” of trials must be balanced with “relevance” (Glasgow and Chambers 2012). Glasgow and Chambers suggest that in order to conduct research that is both rigorous and relevant we must understand that “there is no single research design or method to identify 'truth'” (Glasgow and Chambers 2012). The health care enterprise is complex; there is much variation and a one-size-fits-all approach of traditional research does not foster rapid dissemination and implementation of research into practice.

One factor that affects the impact of an intervention is the reach of the program (a program is the vehicle through which an intervention is delivered), which effects the percentage of the population who will receive intervention (Abrams et al. 1996). One way to conceptualize and measure dissemination and implementation potential is the use the Reach, Effectiveness, Adoption, Implementation, Maintenance (RE-AIM) framework, which emphasizes not only effectiveness and reach, but also adoption, implementation, and maintenance (Glasgow et al. 1999) as shown in Figure 1. 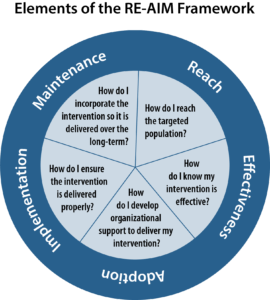 To implement an intervention, one must consider not only its effectiveness, but also methods for:

Additionally, it is critical to consider the demand for the intervention one wishes to implement. There are two questions that bear on demand: